YAA’s Bedlam Lorenz Assembly (BLA) is a nonprofit alternative projects group, founded in 2011 and created to further the development of art and culture in South Florida. The group, consisting of innovators from an eclectic background, works with artists, art institutions, and site-specific locations facilitating the production, presentation and integration of art into culture, with a focus on community accessibility.

BLA was initially established as an intermediary to the Young at Art Museum while working to present a fundraiser for the opening of its new construction. Through the course of the event’s installation the group discovered its production capabilities could be expanded to curating and producing full-scale exhibitions within the new museum and beyond, presenting and assisting in the creation of work by local and national artists with the potential to permanently change the cultural landscape of Broward and the surrounding counties. Since its inception the group has partnered with a vast number of artists, local vendors and arts supporters, organizations and institutions to produce exhibitions ranging from small pop-ups at Art Basel, Miami to museum-wide events including Annual Interest which has raised thousands of dollars for the Young At Art Museum and its youth-enriching programming.

To date BLA has organized eight major exhibitions spanning Davie, Fort Lauderdale and Miami as well as over 20 artist workshops in 2013 alone and a semi-permanent installation and mural in the heart of Fort Lauderdale’s F.A.T. Village arts district. The group has also funded and assisted in the creation of major works by several of South Florida’s most acclaimed working artists, two of which is now permanent fixtures within the Young at Art Museum and was named “Best Curator of 2013” by the West Palm & Broward County New Times. 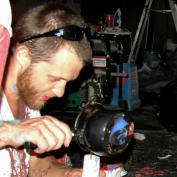